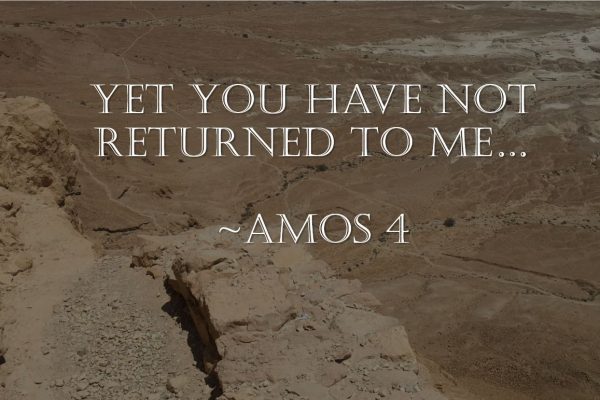 Hear this word, you cows of Bashan, who are on the mountain of Samaria,
Who oppress the poor,
Who crush the needy,
Who say to your husbands, “Bring wine, let us drink!”
The Lord God has sworn by His holiness:
“Behold, the days shall come upon you
When He will take you away with fishhooks,
And your posterity with fishhooks.
You will go out through broken walls,
Each one straight ahead of her,
And you will be cast into Harmon,”
Says the Lord.

“Come to Bethel and transgress,
At Gilgal multiply transgression;
Bring your sacrifices every morning,
Your tithes every three days.
Offer a sacrifice of thanksgiving with leaven,
Proclaim and announce the freewill offerings;
For this you love,
You children of Israel!”
Says the Lord God.

“Also I gave you cleanness of teeth in all your cities,
And lack of bread in all your places;
Yet you have not returned to Me,”
Says the Lord.

“I also withheld rain from you,
When there were still three months to the harvest.
I made it rain on one city,
I withheld rain from another city.
One part was rained upon,
And where it did not rain the part withered.
So two or three cities wandered to another city to drink water,
But they were not satisfied;
Yet you have not returned to Me,”
Says the Lord.

“I blasted you with blight and mildew.
When your gardens increased,
Your vineyards,
Your fig trees,
And your olive trees,
The locust devoured them;
Yet you have not returned to Me,”
Says the Lord.

“I sent among you a plague after the manner of Egypt;
Your young men I killed with a sword,
Along with your captive horses;
I made the stench of your camps come up into your nostrils;
Yet you have not returned to Me,”
Says the Lord.

“I overthrew some of you,
As God overthrew Sodom and Gomorrah,
And you were like a firebrand plucked from the burning;
Yet you have not returned to Me,”
Says the Lord.

“Therefore thus will I do to you, O Israel;
Because I will do this to you,
Prepare to meet your God, O Israel!”

For behold,
He who forms mountains,
And creates the wind,
Who declares to man what his thought is,
And makes the morning darkness,
Who treads the high places of the earth—
The Lord God of hosts is His name.

Over the past two weeks these verses have been ringing in my ears as I look out on the world around me. Originally written to the Northern Kingdom of Israel in the days before they were taken into captivity by the Assyrians, they have much meaning for today. The refrain that echoes in my ears is “Yet you have not returned to Me.” How much complacency and apathy in my own life is causing pain? This past two weeks I have read and seen the words of the prophets like Amos, Jeremiah, and Daniel ring true in new ways.

“The Lord said also to me in the days of Josiah the king: “Have you seen what backsliding Israel has done? She has gone up on every high mountain and under every green tree, and there played the harlot. And I said, after she had done all these things, ‘Return to Me.’ But she did not return. And her treacherous sister Judah saw it. Then I saw that for all the causes for which backsliding Israel had committed adultery, I had put her away and given her a certificate of divorce; yet her treacherous sister Judah did not fear, but went and played the harlot also. So it came to pass, through her casual harlotry, that she defiled the land and committed adultery with stones and trees. And yet for all this her treacherous sister Judah has not turned to Me with her whole heart, but in pretense,” says the Lord”

We have read about how Israel/Judah sinned and were exiled. Judah saw what happened to their brothers and sisters in the North and figured, as long as we have the temple we are fine. They were not fine. Later on blinded and their heart hardened so much that many did not even recognize the Messiah. “‘For though you wash yourself with lye, and use much soap,Yet your iniquity is marked before Me,’ says the Lord God” (Jeremiah 2:22). We as the church have not learned the lessons that were taught to those in Israel the easy way, so now God is calling us to wake-up again. To be the BODY OF CHRIST. To shake us (myself included) out of apathy and out of complacency. It is not easy (I would be the first to raise my hand), but critical at this point in history. Let us pray that we never get to the same point as Jeremiah 15:1 “Then the Lord said to me, ‘Even if Moses and Samuel stood before Me, My mind would not be favorable toward this people. Cast them out of My sight, and let them go forth.'” Jeremiah was told earlier in the book to stop praying for the nation of Judah. God had made His choice to kick them out of the land to Babylon (just as the northern Kingdom was kicked out to Assyria). Jeremiah 14:11 says, “Then the Lord said to me, ‘Do not pray for this people, for their good.'” They needed to learn their lesson outside of the land of Judah, it was for their good (well-being, prosperity).

The Body of Christ, whether in the United States of America or around the world needs to take this time, this season to wake-up and return to God. Not just with our hands and wallets, but with our whole heart and being. The Lord of Hosts is His name! We serve the King of kings and the Lord of lords! Let us (myself included) not take it lightly!