Victory Bible Church > Standard Blog > Pastor Corey > What If There Was No Resurrection? 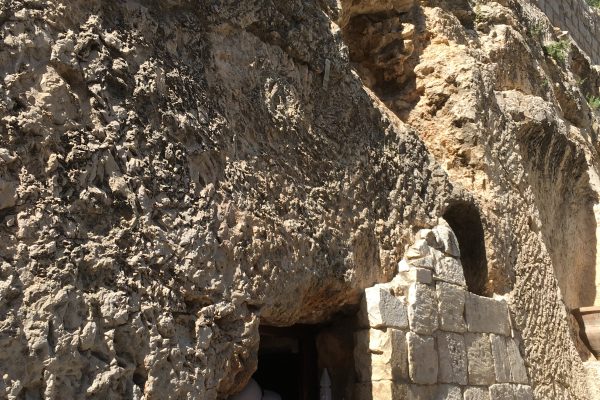 Throughout the world on Resurrection/Easter Sunday there will be millions celebrating the resurrection of Jesus Christ! Many will proclaim in their tongues, “He is risen!” with the refrain, “He is risen, indeed!” The question is: What if Jesus did not rise from the dead? What if there was no resurrection? Why is an empty tomb and a resurrection so critical to the Christian faith? The Apostle Paul will point out the reason as he wrote to the church of Corinth in 1 Corinthians 15.

Before he asks these questions in chapter 15, he gives a brief summary of the Gospel in verses 3-8:

All these occurred BEFORE He was nailed to the cross! He would have been placed on the ground while three giant spikes of metal were driven into His hands and feet to a hunk of splintered wood, then you are lifted up into a hole.

Crucifixion is a terrible way to die. You die by suffocating. Jesus’ body was already human hamburger before He was nailed to the cross. No, He was not just slightly injured, He really died. Even if He had not been nailed to the cross His injuries would have killed Him shortly from infections and blood loss. Christ really died! He died to pay for my sins and your sins!

After this, Joseph of Arimathea, being a disciple of Jesus, but secretly, for fear of the Jews, asked Pilate that he might take away the body of Jesus; and Pilate gave him permission. So he came and took the body of Jesus. And Nicodemus, who at first came to Jesus by night, also came, bringing a mixture of myrrh and aloes, about a hundred pounds. Then they took the body of Jesus, and bound it in strips of linen with the spices, as the custom of the Jews is to bury. Now in the place where He was crucified there was a garden, and in the garden a new tomb in which no one had yet been laid. So there they laid Jesus, because of the Jews’ Preparation Day, for the tomb was nearby.

When I was in Israel in the summer of 2017 I saw the possible location of the crucified and burial. They are merely a few yards apart from one another, as John’s Gospel indicates.

One of things I had not thought of (mostly because of our images and hymns) is that Calvary was not on a hill. It was at street level. The Romans wanted people to see the people they were crucifying up close. It was a warning to not do whatever that person on the cross did.

Joseph of Arimathea and Nicodemus stepped up when the rest of the twelve disciples ran in fear. They prepared the body and placed Him in a tomb. The Pharisees also had been playing attention (maybe even more so than the disciples) that Jesus had said He was going to rise again after 3 days. In Matthew 27:62-66 they want the tomb guarded and sealed.

So the Apostle Paul so far in 1 Corinthians 15 has said that Jesus was going to die for our sins, He would be buried, and now that He rose again from the dead on the third day.

He is risen! He is resurrected. He was not a spirit or ghost. The disciples touched Him and saw the scars from His death. He was not dead anymore!

So after looking at each of these aspects let us look back now at the Apostle Paul’s question: What if there was no resurrection? Now the church in Corinth believed that Jesus had resurrected from the dead, but did not think that there was another resurrection. Paul will take them down a path showing that both have to be true or both have to be false.

He starts off in verse 13 by saying that if there is no resurrection from the dead then CHRIST IS NOT RISEN! So if there is not a resurrection of anyone, then Christ could not have rose either. Paul starts to paint a bleak picture. It reminds me of the third act of Frank Capra’s 1946 film, It’s a Wonderful Life. George Bailey is given the “privilege” of seeing what the world would be like if he had never been born. Here Paul showing the church of Corinth of what if Christ never rose from the dead. It is even bleaker than Pottersville in the film.

In verse 14 he starts making his argument. If Christ is not risen his preaching is empty. The Greek word used here is κενός (kenos) and it means vain, futile, no value, worthless. What I do each Sunday and what thousands of other Bible teachers and preachers do each week is worthless if Christ has not risen from the dead. It would be meaningless.

Apart from the resurrection Jesus could not have conquered sin, death or hell, and those three great evils would be our conquerors.

Not only that, but my faith and your faith is also empty/vain/futile/worthless! Faith in Jesus Christ would have zero value! It would completely worthless!

A dead Savior cannot give life, cannot forgive sins. If Christ had died and was buried and didn’t rise again, that would be the end of the story!

Paul goes on to say that he and the other Apostles would be liars in verse 15. They would be false witnesses of God! It would be a lie that is spread in God’s holy name, if there is no resurrection! If the dead do not rise and Christ has not rose, we are saying that God is a liar!

If the apostles, the prophets, and the New Testament writers lied about the heart of the gospel why should they be believed about anything else

The Apostles (including Paul) preached, testified, and taught the Gospel. They would be beaten, tortured, put into prisons, and most of the time martyred for their faith. If you knew for a fact it was all a lie you would not die for it. Christianity would have disappeared soon after it started.

Paul goes on in verse 18 saying that those who had trusted in Christ for eternal life who have already died are now separated and have perished too. Their faith would be as worthless as ours if there is no resurrection!

His bleakness reaches a climax in verse 19 where states that “if our hope in Christ is only for this life, we are more to be pitied than anyone in the world” (NLT). We are the most pitied of people! Let that settle in. If there is no resurrection, we have no hope, and our life would all be for not. The resurrection is key! A life without a risen Christ is not a life or an eternal life worth living! After Paul paints this grim picture…

In verse 20 he states: But now Christ is Risen from the dead! Several people/religions will say that Jesus was a good man, a good teacher, maybe even a prophet. Yet, they do not believe His God nor do they believe He rose from the dead. He is not just a good person, teacher, or prophet (though He is all that), but He is the spotless Lamb of God who took away the sin of the world! He did it by dying on the cross, being buried, but RISING AGAIN too!

What if there was no resurrection? There would be no hope, no Heaven, and no life! Yet, because of Jesus Christ and His resurrection from the dead there is!

If you have never trusted in Jesus as your personal Savior, today would be a wonderful day to do that. It is so simple. Just admit you are a sinner. We have all sinned (including me). We have told lies, maybe stolen something, thought bad thoughts, said something we should not have said. The Bible says that even one of those things will separate us from God forever. We could never get to Heaven by any “good” things we did. There is no scale in Heaven weighing your “good” from your “bad.” Jesus came to earth and lived a perfect life and went to the cross as you read above to die for our sins. He rose again three days later. When by faith you admit you cannot get to Heaven by yourself and that Jesus is the only way He comes in our lives. It is not a religion it is a relationship. Religion is humankind’s way of trying to get to God, but this is a personal relationship with God. You might pray a prayer something like this. The Prayer does not save you, Jesus saves you. The prayer is just a way by faith to communicate what your heart means.


Dear Jesus, I admit that I am a sinner. I have done bad things and I know that the payment for those things is to be separated from God forever in that terrible place called Hell. I believe that Jesus Christ is the only way to Heaven and I believe that His payment on the cross of Calvary was enough. That His blood paid for my sin. Please come into my life right now and save me. Thank You for saving me! In Jesus’ name I pray. Amen.

If you have done that today I want to be the first to welcome you into the family of God! I and our church would love to hear from you and encourage you in your new walk even if you do not live near us. Please send me an email at: pastorcorey@victorybiblechurch.org