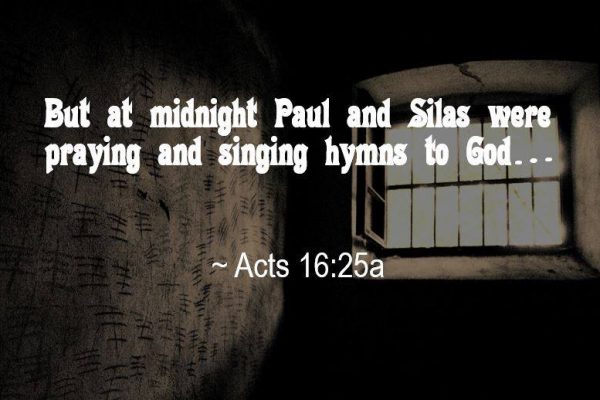 It is easy to praise God when things are going well, but how do you respond when trials and storms come into your life?

The past several days have been interesting. On the evening of Saturday, March 23, 2019, I was driving in my 1998 Oldsmobile around Vestal, NY (near Binghamton, NY where I live) and my transmission went in my car very abruptly. To make matters worse was when the transmission went I was climbing a steep driveway. I could not get to the top. The car was rolling backwards to a busy road. I ended up backing up on the street. It could have easily ended in an accident. The car had to go into third gear and then second gear to get me safely onto the side of a busy road.

How do we respond when trials and storms come into our lives? For the Apostle Paul and Silas, they encountered several trials. In Acts 16 they were in the city of Philippi when a girl with a demon was healed. “The magistrates tore off their clothes (Paul and Silas’ clothes) and commanded them to be beaten with rods. And when they had laid many stripes on them, they threw them into prison, commanding the jailer to keep them securely. Having received such a charge, he put them into the inner prison and fastened their feet in the stocks” (Acts 16:22b-24). How would you respond to such treatment? They were stripped of their clothes, beat, had cuts, bruises, possible broken bones, and then thrown in prison and their feet secured. How would you respond?

The transmission was officially dead on the side of the Vestal Parkway. The first thing I did was thank God for His protection in the midst of the craziness that had happened. I thanked Him that I did not hit anyone backing up or crossing the busy road. The second thing I did was call AAA. I was thankful to have that membership as I had a feeling I would need a tow back home. The person that would tow it home arrived soon after. On the way back home I told him how thankful I was that this did not happen tomorrow as I would have been driving I-81 to the church I pastored in Hazleton (Victory Bible Church). He shared that he was on a worship team at a church in Owego, NY. When I arrived back home I prayed with him and his ministry. Thankful to meet a brother in the midst of my trial.

How did Paul and Silas respond to their storm? “But at midnight Paul and Silas were praying and singing hymns to God, and the prisoners were listening to them” (Acts 16:25). You might not be happy with the circumstances and you might be angry, but in the midst of it you can still pray and praise God. Your reaction to your storm, your trial, your situation might give hope to others around you as it did for the Philippian jailer if you read the rest of chapter 16.

When I arrived home my landlady (whom I had called while waiting for AAA) said she would let me to borrow one of her cars so I would be able to get down to Hazleton.

The Monday after the car died I sat down to think about all I had to be thankful about with the situation and wrote these words:

Is it frustrating? Absolutely, but I am so thankful for the way God allowed me to get to safety before the car completely died. I am so thankful that this happened on Saturday night and not Sunday morning on I-81 heading to my church. I am thankful that the man who towed my car was a brother in Christ and that we were able to pray together after he dropped my car off at my house. I am thankful that my landlady allowed me to use one of her cars, so I was able to get down to Victory Bible Church yesterday. I am thankful for my dad coming down today to confirm that it was the transmission. I am thankful I am close enough to Davis College to walk to work and that I have two legs that I am to walk the short distance. I am thankful for God’s grace and I know He will provide another car. It might not be this week or next week, but in His timing He will provide. Praise Him whether a car works or whether it decides to die. My life verse has always been Romans 8:28, ” And we know that all things work together for good to those who love God, to those who are the called according to His purpose.” Even in the midst of a trial or storm God can use it for my good and His glory.

How is God using the situation you are in today to grow you, be a witness to others, and ultimately bring glory to Himself?