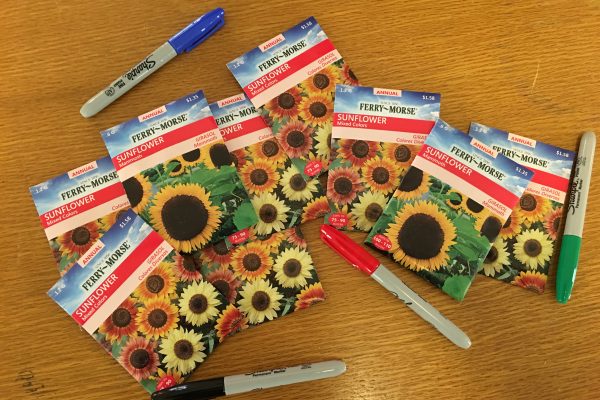 One year ago I woke up to an email with a single word in the subject: Help. Unbeknownst to me on that Saturday morning, God was orchestrating a new direction for my life.

I found that Pastor Ron had been called home to glory the day before and that he had desired that someone from his Alma Mater (Davis College) to do the funeral service. I volunteered to do the service the following Wednesday as Dr. Dino Pedrone (President at the time) and Rev. Daniel Rathmell were out of town. I would learn much about Ron over the next few days and Victory Bible Church as I prepared my message. One thing I heard was that Ron liked to use the phrase spreading “chicken feed.” He wanted to plant seeds of the Gospel.

That Wednesday, February 28, 2018 I would head down to Hazleton, PA for the first time, it would not be my last, unbeknownst to me. The funeral and the graveside service helped me to understand the church family of Victory Bible Church, but it would be the time after the meal that truly showed me their heart.

Chicken Feed or as the Bible calls it, seed. Farming is a crucial part of the Bible. Adam was a farmer (even before the Fall) and dozens of other people in the Scriptures have a roll that relates to agriculture. Jesus would use the imagery in Matthew 13 (also told in Mark 4 and Luke 8) of the sower of seeds and more importantly the soils.

Jesus would explain this parable to His disciples in Matthew 13:18-23. He starts with the seed that falls by the side of the road, the first soil type. This is anyone who hears the word (the seed is the word of the kingdom), but DOES NOT understand it. Note: The Greek word for ‘hear’ is where we get our English word acoustic from. Satan comes along and takes away what was planted. It was there for a moment, but couldn’t take root.

The second soil is that of stony ground. Very similar to the first soil on the side of the road. There is no root. When push comes to shove they look elsewhere.

The third location is the weeds and thorns where this seed falls. The world looks good, too good. Just like the stony ground, when push comes to shove they are gone. There is no root. No foundation.

The final seeds land on soil that has been been prepared and tilled. The seed takes hold! They hear the Word, Understand, and Respond!

Seeds were spread over all these different soils. The good news of Jesus Christ was spread, but we (unlike the sower) do not know what the soils are for each person’s heart. Some of the seeds on the rocky or thorny places could be believers in Jesus Christ, but are struggling. Maybe God has placed them in our lives to help them move into the good soil, take root and thrive.

The Apostle Paul would write in 1 Corinthians 3:5-8, “Who then is Paul, and who is Apollos, but ministers through whom you believed, as the Lord gave to each one? I planted, Apollos watered, but God gave the increase. So then neither he who plants is anything, nor he who waters, but God who gives the increase. Now he who plants and he who waters are one, and each one will receive his own reward according to his own labor.” Paul planted seeds and Apollos watered, but GOD gave the increase!

We are commanded to sow seeds, water seeds, but also we as believers in Jesus Christ are also told in John 4 to “lift up your eyes and look at the fields, for they are already white for harvest” (John 4:35b). God might be using you to lead someone to Christ. You neither sowed the seed nor watered, but God is going to use you to lead them to the cross. Someone years earlier had tilled the soil, someone else planted the seeds, another had watered, and now God is bringing the harvest and is using you.

Maybe today is the day of the harvest for you. Maybe seeds have been planted and watered in your life. Maybe Jesus did not make sense to you, but today you want to know Him. I would encourage you not to wait, come to Him. Today is the day of salvation.

Many people will pray a prayer but it is not the prayer that saves or redeems you it is Jesus Christ. A prayer is just a way of putting it in words what you genuinely know in your inner most being and telling it to Jesus. The fact is everyone is born a sinner and then we continue to sin. Sin is anything we think, say, or do that displeases God. You might say, “I have never killed anyone or never robbed a bank,” but sin is even a white lie or cheating on a test. One sin says we are guilty and the payment for being guilty is physical and spiritual separation from God forever. Jesus (who is God) came to earth to pay a bill neither you nor I could pay with all the money in the world or with a million lifetimes. He paid the bill in full by dying on the cross and then rising again. He is the ONLY way to go to Heaven. Not church attendance, nor baptism, nor giving money to a church, or having Christian parents, but Jesus Christ and Him alone. You might say a prayer similar to this:

Dear Jesus, I admit that I am a sinner. I have done bad things and I know that the payment for those things is to be separated from God forever in that terrible place called Hell. I believe that Jesus Christ is the only way to Heaven and I believe that His payment on the cross of Calvary was enough. That His blood paid for my sin. Please come into my life right now and save me. Thank You for saving me! In Jesus’ name I pray. Amen.

If you prayed a prayer similar to this one above and you genuine meant it, you are saved! You are a child of God! The words do not save, it is Jesus Christ who saves! Welcome to the Family!

For those who know Jesus as your Savior or who have just accepted Him right now there might be one or more people that are weighing on your heart. During my sermon on February 24, 2019 I brought in sunflower seeds for the members of Victory Bible to write the name of someone they want to pray for in 2019. It is a visual reminder to sow “Sonflower” seeds of the Gospel. Who will you pray for in 2019?

Pastor Ron wanted everyone to spread chicken feed and Jesus wants us to spread/sow the seeds of the Gospel. Even though Pastor Ron is home in glory some of his seeds that he spread during his life are still being watered and some are ready for harvest.