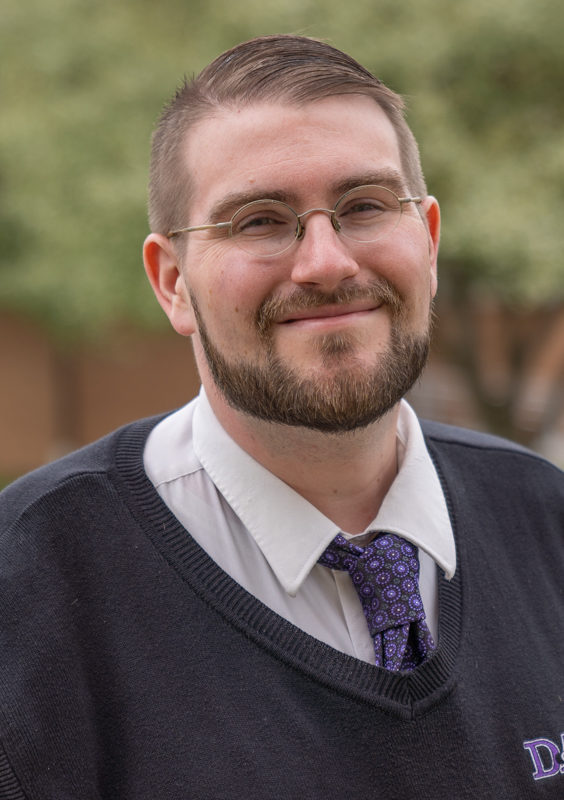 Pastor Corey Adams was born and grew up in the Finger Lakes region of New York State. He accepted Jesus Christ as his personal Lord and Savior at the age of six. Five years later on February 26, 1995 he was baptized at Second Baptist Church in Auburn, NY.

After graduating from High School he attended Davis College in Johnson City, NY from 2003-2007 where he earned his Bachelor degree. During his time at Davis he attended and served at West Corners Baptist Church in Endicott, NY. During his nearly 15 years at the church he served in many roles including: Adult Sunday School Teacher, Deacon, Trustee, Secretary, Treasurer, Song Leader, and Pulpit Supply.

From 2008-2015, Pastor Corey worked as a contractor for the aerospace engineering company, Lockheed Martin in Owego, NY. He worked in the I.T. Department fixing computers and assisting in other technology related capacities. In 2015 he returned to work at Davis College where he currently serves as the Executive Assistant to Dr. Dino Pedrone, the 9th president of the College and now Chancellor. He is also the Historian for the Institution.

He has a passion for Bible Translation and for Bibleless people groups in Papua New Guinea (PNG). In the summer of 2005 he took a two-month missions trip to PNG with Wycliffe Bible Translators where he experienced firsthand Bible translation.

In the summer of 2017 he traveled with Dr. Pedrone to the nation of Israel for week. He was able to experience the land of the Bible where he has a new perspective and outlook on the Bible. When he reads, studies, and preaches the Word of God this new understanding comes through.

In April of 2018 he was called to become the pastor of Victory Bible Church after the homegoing of Pastor Ron in February of 2018. Pastor Corey began his ministry in May of 2018. He is looking forward to the new journey that God has our church family on and he prays that God will be glorified by it.

In the 1980s, Pastor Ron and Chris attended Practical Bible Training School (PBTS) in Johnson City, NY. It is now Davis College. Ron would graduate from the College in 1988 and then finish his Bachelor degree in 2002. They were appointed as missionaries with WEF Ministries in 1988.

After the founding of Victory Bible Church in 2005, the church needed a place to call its own. The former Welsh Congregational United Church of Christ building in Junedale, PA was no longer in use and in October 2006 the deed was signed over to Victory Bible Church.

In the evening of Friday, February 23, 2018 Pastor Ron went home to glory with his Lord and Savior, Jesus Christ. His legacy continues on as the Word of God continues to be preached at Victory Bible Church.