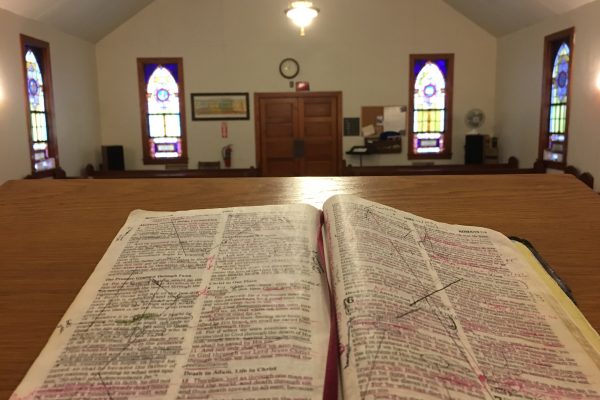 This past Sunday I began preaching from Romans 6. Does a believer in Jesus Christ have a license to sin? Is Salvation just a fire insurance policy or a get out of Hell free card? The Apostle Paul would have something to say about that.

In chapter 5, the Paul had written that through one man’s offense or trespass (that being Adam) that sin entered the world. Not only that, but death also entered the human race. It was like a poison that was passed down from generation to generation to the present time. He would go on to write that it would be through One man that salvation/redemption would come into the world, Jesus Christ.

Chapter 6 begins with Paul asking a rhetorical question: “Shall we continue in sin that grace may abound?” (Romans 6:1b NKJV). J.B. Phillips in his New Testament in Modern English translates it this way, “Shall we sin to our heart’s content and see how far we can exploit the grace of God?” Paul’s resounding answer is: Absolutely NOT! Why would someone who has been saved/redeemed from the mud of sin want to continue playing in it? It does not mean we will not sin, but we should want to NOT sin.

The next two verses (3-4) of chapter 6 bring up a word that different denominations of the church translate and interpret, it is the word Baptism. The word baptism is a transliterated word in the English Bible rather than a translated word.

The Bible was originally written in three languages: Hebrew, Aramaic, and Koine (COIN-A) Greek. Hebrew was the primary language of the Old Testament with some Aramaic sprinkled throughout (mostly in Daniel and Nehemiah), and the New Testament was written in Koine Greek. When the Bible is translated into any other language you will run into issues of the structure of sentences, not having an equivalent word in the language you are translating to, or vice versa, and several other challenges.

In our English Bible there are certain words that instead of being translated (This Greek word means love…so you translate it as love in English, see my Valentine’s Day post about the four different Greek words for love) they transliterate the word. Transliteration is the act of taking the Greek word in the case of the post the word is βαπτίζω (baptidzo).

The Greek word Baptidzo was brought into English as Baptism, whereas the definition of this word means to “immerse or dip.” I am 100% for full immersion baptism after someone is saved as Jesus commanded it (Matthew 28:18-20) as an act of obedience. We see it with the account of the Ethiopian Eunuch and Philip (Acts 8:26-40). Once someone is saved they should be baptized with water. Many commentaries I studied believe that these verses are about water baptism, while I do not think that is the meaning. Let us look at verse 3 of chapter six substituting the word immersed in for baptized.

“Or do you not know that as many of us as were immersed into Christ Jesus were immersed into His death?” Remember what Paul was saying back in chapter 5. He was talking about through Adam’s sin, death spread and was passed down from generation to generation. We were immersed into sin and death because of his act of disobedience. Yet, now we can be immersed into the sacrifice of Jesus Christ. The sinless lamb of God who came to take away the sin of the world. He was going to immerse us with the Holy Spirit. Remember what John the Baptist (the person who did the immersing) said in Matthew 3:11, “I indeed baptize you with water unto repentance, but He who is coming after me is mightier than I, whose sandals I am not worthy to carry. He will baptize you with the Holy Spirit and fire.” John immersed with water, but Jesus was going to immerse with the Holy Spirit and fire. We have been immersed into His sacrifice and we immerse our bodies in water to be a physical/outward proclamation of the inward working of Christ who has already baptized us.

Have you been baptized or immersed into Christ Jesus? Are you a child of Him? Make today the day of Salvation. Feel free to contact me if you want to know how you can have a personal relationship with Jesus Christ.