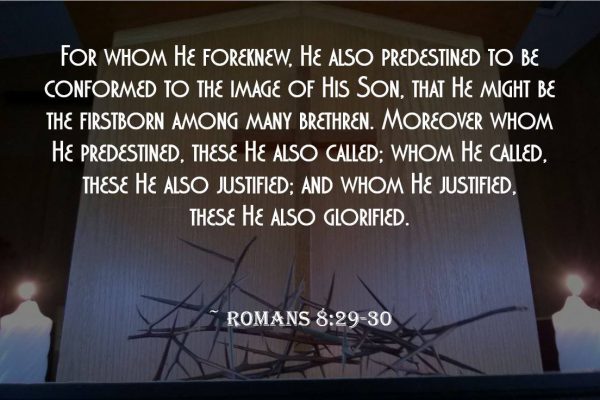 Notice that the Apostle Paul in these verses refers to these events in the past tense? God:

God has a plan and His plan for you has existed before you were conceived or born. “Before I formed you in the womb I knew you; Before you were born I sanctified you; I ordained you a prophet to the nations” (Jeremiah 1:5). His plan for you existed before the foundation of the world was laid. “Blessed be the God and Father of our Lord Jesus Christ, who has blessed us with every spiritual blessing in the heavenly places in Christ, just as He chose us in Him before the foundation of the world, that we should be holy and without blame before Him in love” (Ephesians 1:8-9). It has existed even before time started. “[God] who has saved us and called us with a holy calling, not according to our works, but according to His own purpose and grace which was given to us in Christ Jesus before time began” (2 Timothy 1:9).

God created what we refer to us time, but He is outside of time. He as the Creator of the Universe and the Creator of time, willing stepped down from the infinite into the finite, from the immortal into the mortal, from the incorruptible into the corruptible. He knew before Creation that He would need to die for the sins of the world. God saw the BIG picture before “Let there be light” was uttered. He knew us, He predestined us, He called us, He justified us, and in His view we are already glorified with Him. It is hard to wrap one’s mortal mind around while “we ourselves groan within ourselves, eagerly waiting for the adoption, the redemption of our body” (Romans 8:23b). Until that day that Jesus Christ calls us home or returns in the rapture we long for the day when we are glorified as God sees us.