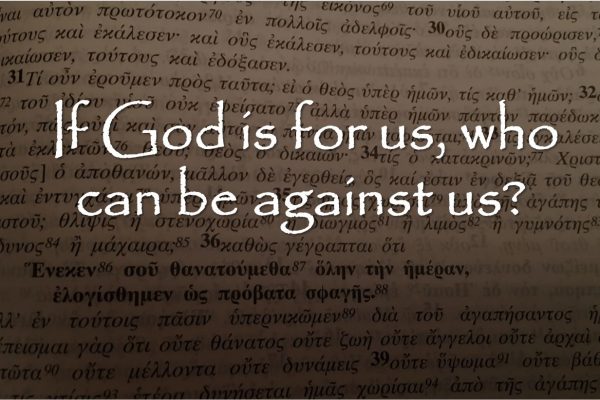 What then shall we say to these things? If God is for us, who can be against us? He who did not spare His own Son, but delivered Him up for us all, how shall He not with Him also freely give us all things? Who shall bring a charge against God’s elect? It is God who justifies. Who is he who condemns? It is Christ who died, and furthermore is also risen, who is even at the right hand of God, who also makes intercession for us.

Can anyone, any thing, or any event take away our salvation? Is there some way that I can lose my salvation? These were questions the early believers in Jesus Christ had, and no doubt these questions still continue into the 21st century. The last nine verses of Romans 8 the Apostle Paul addresses these concerns.

He begins by asking, “If God is for us, who can be against us?” “Paul is suggesting by this rhetorical question is that nobody—and no ‘thing’—can ultimately harm, or stand in the way of, the one whom God is ‘for'” (Douglas Moo). If someone or something were able to take away our salvation they or that would have to be greater than God Himself! John MacArthur asks it best, “Is there anyone stronger than God, the Creator of everything and everyone who exits?”

God did not spare His own Son, Jesus Christ, from the horrible death on the cross. He did this while we godless, sinners, and enemies of God (Romans 5:6-11), how much more will He kept us secure and protected once we are secure? As the Apostle Paul would write in 2 Corinthians 5:21, ” For He (God the Father) made Him (Jesus Christ) who knew no sin to be sin for us, that we might become the righteousness of God in Him.”

Who is he who condemns? God is the ONLY ONE who can condemn anyone. That is He is the only One who can pronounce sentence. The devil can accuse, but to condemn is only something God can do. He is the righteous Judge. He has told us that “there is therefore now no condemnation to those who are in Christ Jesus” (Romans 8:1).

Why are we not condemned? The same reason that the Apostle Paul has been sharing for the past several chapters, Jesus Christ! He died, He is risen, and He is in Heaven making intercession for us!

Jesus told His disciples in John 10:28, “And I give them eternal life, and they shall never perish; neither shall anyone snatch them out of My hand.” Christ gave us eternal life, not temporary life.

“He who believes in Him is not condemned, but he who does not believe is condemned already…” The Apostle Paul echoes that in Romans 8:1 as we have mentioned earlier.

We have security in Jesus Christ, in His sacrifice and His resurrection. In case you still had any doubts, the Apostle Paul continues on in verses 35-39. God is for us, He sent His Son! No accusations against a believer will stand in the end, because God has told us that we are not under condemnation!