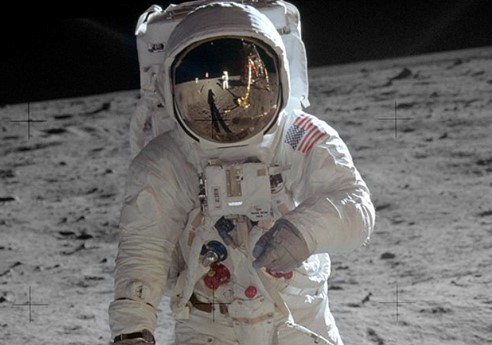 “Houston, Tranquility Base here. The Eagle has landed.” Those were the first words of Neil Armstrong after he and Edwin “Buzz” Aldrin first touched down on the surface of the moon. Today marks half a century since Apollo 11 landed on that magnificent desolation of a landscape. Before the “One small step for man, one giant leap for mankind” uttered there was a time of reflection. Astronaut Buzz Aldrin had wanted a way to celebrate this historic event. Buzz, an elder at Webster Presbyterian Church in Webster, Texas, had spoken to his pastor in the days leading up to the launch. Buzz decided to take communion to the surface of the moon. In 1970 he shared it with Guideposts. Below is the text from that article:

Leading up to taking the Lord’s table he took out a hand written piece of paper with John 15:5 written on it: “I am the vine, you are the branches. Whoever remains in me, and I in him, will bear much fruit; for you can do nothing without me”

Half a century ago on body of another world. A place where no other human had ever landed, the first church service took place. So even if you are 238,855 miles from earth, God is still there. There is no place on earth or in space that you can go where God is not present.